Toptest.sg spends many hours on research to help you find the best products to buy. Each product here is independently selected by our team. If you buy something through links in our content, we can earn a small commission that helps support our work.

TV sets are one of those pieces of technology that defined the 20th century. Invented in the end of the 19th century they were first sold commercially in the 1920s – one hundred years ago.

During that time, TV sets have gone through a lot of different iterations. That’s especially true in the last 20-30 years, however, as newer and newer technologies keep pushing their limits. Today, there are several similar but still quite different types of TV sets to choose from so we’ll detail most of their differences here. By the end, you’ll hopefully have found the best TVs for your needs and preferences.

The different types of TVs

For the longest time TV sets only came in one major type – cathode-ray tube TVs. That’s where the old “The tube” nickname for TVs comes from too. In the past two or three decades, however, several new types of TV sets have emerged with the development of new display technologies. Bigger, flatter, and with more vivid colors, these new types all offer better viewing quality than the old ones. Which are the best TVs among them, however?

The classic tube-like direct view TVs are very hard to find these days as they are no longer manufactured. Still, it is worth a mention given its status as the classic TV type. Plus, who knows, they may see a resurgence in the future. 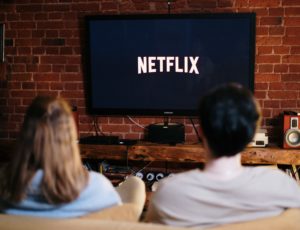 Invented in the 1980s by Texas Instruments, DLP TV sets used optical semiconductor chips to process digital signals. The result was a much clearer image than that of direct view TV sets, a flat screen and a lighter weight, as well as a longer life span.

Newer technologies have emerged since then, however, and most DLP TV production has been ceased as of 2012. Some second-hand and refurbished models are still available.

Next, plasma display panel TVs were invented in the 1990s and were designed as a cellular grid of pixels filled with plasma. These grids were caught between glass panels in the front and read and were surrounded by electrodes which project the light and images into the plasma.
Because of that, plasma panel TVs offered a much faster frame response, better visual quality, and a more compact flat screen. They too were outclassed by newer models, however.

Onto the three newest and more common models, LCD TVs are by far the most popular type of TV set today. Curiously enough, their concept was first conceived in the 1960s but it took some time to be perfected. With LCD TVs, the key ingredient are the so-called “liquid crystals”.

Every pixel on an LCD screen is made out of several liquid crystal molecules, all aligned between two electrodes and two polarizing filters. When the TV is turned on, voltage is applied to the crystals and they rotate in correspondence to it, creating different light colors.

Today, while they have a worthy competition, LCD TV screens are still at the top of the food chain, at least in terms of how common they are. They are affordable, come in different sizes, and offer excellent color and images. The only downside they have is the slight motion blur that happens under slow response times.

Similar to LCDs, OLED TVs use organic molecules of polymers that also respond to electricity and change their colors based on it. OLEDs were first introduced in the 2012s and have been rising in popularity ever since, rivaling LCDs with their quality. 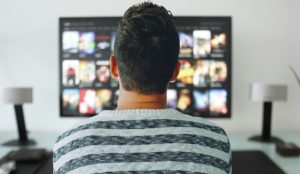 OLEDs lack the motion blur problem of LCDs too as their LED technology allows for faster response times. They also require less energy (~40% less) than LCDs because they don’t use backlighting. The OLED technology is also arguably more exciting in terms of the potential of future development.

They are more expensive than LCDs, however. Another major drawback of these TVs is that they have a shorter lifespan than LCDs as the organic LEDs start producing more washed out images after several years (depending on use). If and when that problem is fixed we can expect OLEDs to completely replaced LCD screens rather quickly.

Similar to LCDs and OLEDs, this last TV type uses nanoparticles called “quantum dots” instead of organic molecules. Thanks to them, QLEDs offer better color and brightness but inferior contrast ratios. They are also typically larger, longer, and less prone to burn-ins. Price-wise, they range between comparable LCDs and OLEDs.

What should I look for when buying a TV?

Like computers, modern TVs offer a wide range of hardware and software features and benefits you can choose from. Picking a TV that has everything you want and no unnecessary “excess” features is usually the best choice as there’s no sense overpaying for features you don’t want. 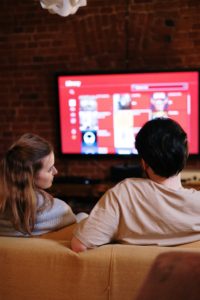 Size matters for TVs as it does for most other things. Not only do bigger TVs offer a more “cinematic” experience but it’s also smart to consider where you’re going to put them, how much space you’re going to need, etc.

All modern TV screens are technically flat but they’re still divided into “flat” and “curved”. Curved TVs are also flat but have a slight vertical curve to them which is supposed to improve the viewing experience for bigger sets. This is largely subjective, however, so just try both types in the store and pick what you like more.

Of course, there are lots of other additional features modern TVs have. We won’t go over every specific game or setting a modern TV might have but here are some pointers to look out for:

As you can see, while some types of TV sets have definitely been outclassed and rendered obsolete, 3 new types are still battling for the “Best TVs” title. LCDs, OLEDs, and QLEDs all offer overall excellent picture quality with some minor differences between them. The affordability and longer lifespan of LCDs are still keeping them at the top of the hill but we can expect that to change as OLEDs and QLEDs keep improving.